JULY 2013
Very honored to have a track included on DEF CON 21: The Official Soundtrack!

JUNE 2012
I have a wacky tune out on a new compilation.
It's lgpt, guitar and yelling.
Handheld Heroes V/A Vol 1

MAY 2012
I've made a very fun remix for a great band, Ya-Ya Boom.
It's available for free here

DECEMBER 2011
After much anticipation the world over, my collaboration with Jessica Billey for 8-Bit Operators is released!
It is a cover of Don't Pass Me By for WANNA HLD YR HANDHELD
CHECK IT OUT HERE

Also, a very nice 2playerproductions video from my performance at Dataport this year has been uploaded.
I had a new banjo pickup and you can hear my fingers scraping on the banjo head when I strum.
I'm going to have to adapt to that.


Finally, I am supremely honored to be Mr. February for the 2012 Pulsewave Calendar
All profits from this go to a great non-profit collective and community that has done so much for so many over the years.
Chock full of amazing photos from Chiptography

TWO BIG EVENTS for me in NYC
I'm hosting/performing at the TCTD Awards
Wednedsay, May 18th at The Tank, 354 West 45th Street (between 8th and 9th Avenues), Manhattan
AND
I have a set of all fun cover tunes and a new EP of them for HEXAWE All-Stars
Sunday, May 22 at 6:00pm - May 23 at 12:00pm @Babycastles Arcade 285 Kent Avenue - Brooklyn

1. I'm in a new awesome surf band. We have a couple demo recordings up for people to check out here. - more to come!

2. I have a song out on the new 8bitpeoples CD, Reformat. The story of the CD and how it happened is quite amazing.

3. I have a song out on Chip In: Japan - A benefit for Red Cross
It's an exclusive release of my infamous version of "Still Rock and Roll to Me."

4. I made a flier and 'ROM'flier for the Pulsewave 5th Anniversary show... 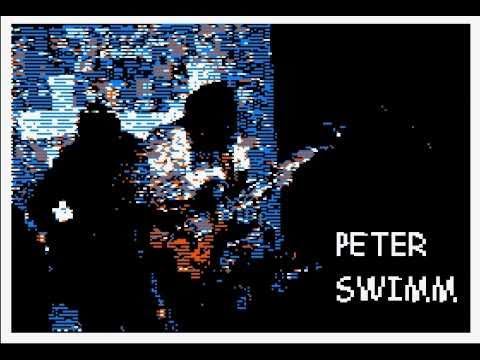 The Grave of Nobody's Darling plays Corazon Santa Fe Friday, Jan 28th and it is going to be AWESOME!

More shows and news to come...
SEPTEMBER 2010
My remix of the wonderfully noisy Da Pantz song, Astronaut, is released into the wild!
Da Pantz - rePantz'd

I've been confirmed - playing the Classic Gaming Expo in Las Vegas, July 31-Aug 1
I am very excited.
I have 3 songs and 1 remix submitted to various releases, not sure when they see the light of day.

GREAT NEWS - I've been nominated as performer of the year at True Chip Till Death!
I had some great shows in Chicago, New York and Philly last year.
LINK TO THE NONIMATION

(wow, I was also nominated for Album and Artist of the Year!)
congrats to the deserving winners (ie, not me hahaha)
Let's make this the best year EVER! 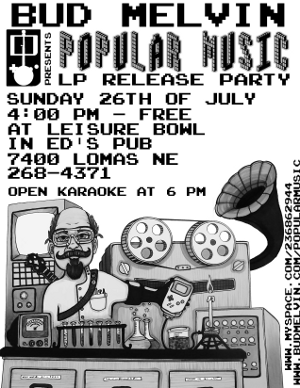 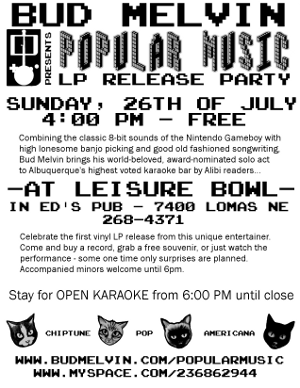 Also also also
My other band (The Grave of Nobody's Darling) played an awesome new year's show and have a new release
You can buy CD or digital at CDBABY
or email me for vinyl.

Stay tuned for info about the EP and 2 exclusive songs
I'm doing for compilations. AUG/ SEPT 2007 Next couple months are busy.
Stay tuned for a new CD/online release -
It's a movie soundtrack for the western 'Nightside' by Paul Owens

Also work is beginning on a new chiptune project.

Here's some shows, please note and come to the solo gig Oct 3rd

I got some nice recordings of the Brussels and Stockholm shows
and will try to put together a live CD if there's not too many mistakes. MAY 2006 Thanks everyone for making the europe tour so fun and successful,
and american hugs to Lo-Bat, Alles Los and Johan. APRIL 2006 Lionhead Bunny presents our sound installation piece
for Harvesting Local Soundscapes

March 2006 Here's a dumb cover tune I just did - I Want You to Want Me
dedicated to all my good friends in Rockford, IL. February 2006 I've added more stuff to the site.
A new pedal steel/gameboy jazz standard, I'm Old Fashioned
It's my new favorite and it might wind up on my next CD I posted a cover song I couldn't stop thinking about doing after the disaster:Mississippi Queen I've uploaded a new page of gameboy camera images, with more to come soon:Balloon Fiesta October 2005
Since the move, I have made little to no progress on my next album
But a lot of smaller projects have been in the works My song, 1+1=1+1 has just been released from the Netherlands
on WM Recording's Numerology compliation. It's all free to download.
Included on the song page is a scan of my original linocut cover
used for the limited edition CD single.
GET IT HERE Some old and new gameboy camera prints will be on display
At the Game Paused art exhibit at ApArt Gallery in London
The exhibit runs from Nov 3rd to Nov 13th, 2005
Their webpage is here I have song coming out soon for an upcoming Kraftwerk covers compliation
Keep checking Receptors Music for info.
I think this comes out in time for your holiday shopping. JULY 2005
I have had to postpone my visit to Europe
I'm spending the month moving to New Mexico instead. Here's some pictures of me and some of my gameboy art
from what was probably my last Chicago show for a while.
Once I get settled I'll try and post some of my video.

I have a tune on the Tina Turner compliation
for the new Terry Plumming magazine
You can find it here. MAY 2005
I'm playing May 26th at sonotheque in chicago
check shows for info
also I'll be in Europe July 8th-16th...info soon APRIL 2005
Thanks to everyone who came to the data destruction show
especially this person:
Bud Melvin was the first up, and I have to say I wasn't expecting all that much Here's what I do sometimes when I don't rock out on the gameboy.
The Slow Planet MAR 2005
Come to this show or I'll never work in this town again!
March 17th - Bottom Lounge, Chicago - DATA DESTRUCTION TOUR 2005 - click for details DEC 2004
the new year approaches
I will resolve to get some more music done
In the meantime...
I got a really nice 1-page writeup
In the new 10x10 magazine
Buy it now, or better yet just get a subscription
so you don't miss anything cool
NoV 2nd 2004
USA election day
Chipolitiks Vol. 1: 1984 OUT NOW!
I contributed a song for this compilation
timed to coincide with the U.S. elections
and the tracks are available for free until the inauguration in January.
www.toilville.com Sept 2004
I have redesigned the MUSIC page.
Some new songs are in the works
Please check it out and enjoy! Also there's an article about gameboy music
I'm in there along with a couple friends
It's in the new Ready Made Magazine
I haven't read it yet.

Welcome. This page is brand new for 2003. I needed to get it up and running by 1/15/02 to host a soundfile for the Def Leppard cover song contest.

I am doing this site in html and am learning as I go along. Some plans for additions to this site